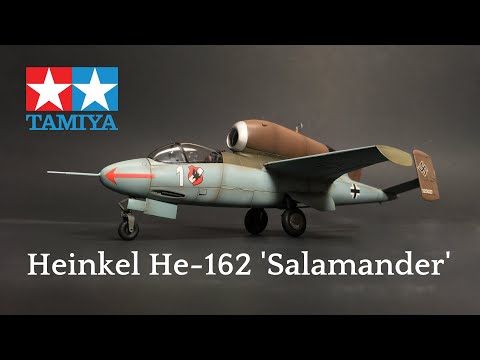 Hello again everyone, today I will be building Tamiya's 1/48th scale Heinkel He-162 A-2 'Salamander', also known as the Volksjager in Luftwaffe service at the end of world war two.

I haven't really looked into the history of this kit, but I suspect it is either newer or mid-life Tamiya. The fit is incredible, almost no putty is needed and what putty was used was almost certainly a result of my own faulty building.

I had been poking at this one for years- I think I started building it like three years ago, and then got to primer, and then shelved it because I lost the canopy. But HUGE ups to Tamiya NA, because they got me a replacement clear sprue at no cost to myself even though it was absolutely my own fault for losing it.

As with everything from this run of builds I selected one major thing to try and work on in this project, and for this one it was an honest effort at post shading. So this became a vehicle to experiment with that, and I am quite satisfied with the result. Post shading isn't the easiest thing for a beginner to attempt, and to do it you basically need to possess and be confident in using an airbrush. I think mine are a bit too heavy, but for my first shot at this technique I think it's a decent result. I will continue trying this in the future on kits that I think would be best served by it.